I finally watched “The Next Karate Kid” starring new comer Hilary Swank and old comer Pat Morita. Ok I know this shit is a part 4 of the series, but I thought this shit was pretty good. It starts with Sgt. Kesuke Miyagi going to visit some honkeys he used to be friends with back in some war. There he meets Hilary Swank who is a bitch (meaning she was mean). So Mr. Miyagi is all I will help this bitch out with this wax on/ wax off shit and sit her straight. Swank goes to a kinda of half ass military school, the bad guys in the story are these assholes that are in karate R.O.T.C., and the assholes teacher is fuckin Michael Ironsides (I fuckin love Michael Ironasides). So anyway Mr. Miyagi takes swank to some monk get away to train her, there the monks train her to the song “dreams” by the Cranberries. I was like WHAT THE FUCK-AMAZING!! Swank also meets some nice dude in her school who likes her, but he get his ass whipped by the assholes and she has to save him. Then Mr. Miyagi has a show down with Michael Ironsides, which was amazing, and car blows up. Also Swank asks Mr. Miyagi when they are going to get to karate chop some boards, and Mr. Miyagi says “what wood ever done to you?” I was like “TRUE”.

A. A chick karate kid works for me, but I would have made her character a lesbian, just cuz it’s hotter.

B. I don’t give a fuck how old Mr. Miyagi is or any other Asian dude, I believe they will whip my ass at any age. If it was an old honkey in this movie I would have said this is bull shit.

C. I think this Hilary Swank has potential and could play a boxer or even a boy in future career.

D. Michael Ironsides is the best asshole on earth.

E. Swank jumped on a fuckin pizza delivery dudes car to avoid getting hit by it.

F. They also played the songs “You Gotta Be” by Des’ree and “Moving On Up” by M People. Amazing.

G. Every 15 minutes in this movie I keep thinking Mr. Miyagi was going to rape Hilary Swank. I feel like in real life he keep looking as her ass or something pervy like that.

H. Ralph Macchio should have had a cameo, and been in a 3 way with Mr. Miyagi
and Hilary Swank. “Running a Train on Karate Kids” now that would be a fucked movie. 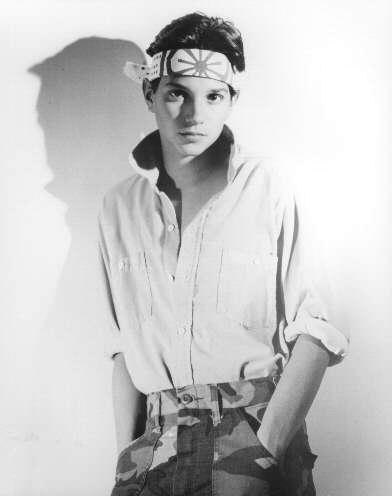 J. I made this video of Hilary attacking