UPDATE: The Plaza Atlanta Theatre screened it last night and Blast-Off Burlesque performed a stage show to go along with it. It was an amazing and trashy good time bitch. Pics below.

Listen to the theme song while you read this review.

Ok I have seen John Waters “Female Trouble” before but I was little and barely remembered it, so I watched it last night again and decided to review it so people would know about it or watch it or sleep with it. The story starts off with a big girl named Dawn Davenport (played by a big man named Divine), and Dawn is a bad girl too.  All she wants for Christmas is some cha-cha heels, and she does not get them. So she beats up her parents on Christmas and runs down the street and gets picked up by a dude who takes her to the city dump and has sex with her. Later Dawn is pregnant and has her baby on a sofa in her basement by herself. Dawn bites the umbilical cord after the baby comes out. Now Dawn Davenport and her baby Taffy meet this straight hair dresser named Gator and Dawn and him get married, and they show Gator’s wee wee. Then one day during sex Gator shoves a carrot into Dawns mouth and she is pissed about it so they get a divorce. The daughter Taffy hates gator and Dawn and is now 14 years old, but time has not been good to her because she looks 40. Dawn then meets this weird couple who do not believe in sex but they think Dawn is beautiful and want to take pictures of her while she steals shit. Gator’s Aunt Ida is pissed about her nephews divorce from Dawn and goes to Dawn’s house and throws acid in her face. Dawn is now disfigured and everyone think she looks better so they take more pictures of her. The fame goes to Dawn’s head and she kills her daughter who is now Hare Krishna (fuck it took me forever to figure out how to spell this word). In the end she does a fashion show on a trampoline and shoots people in the audience. THIS MOVIE MAKES SO MUCH SENSE TO ME I AM DIZZY. I must have said “True” every other scene. This movie is honest to me and it was shot honestly. They call this type of film “Guerrilla filmmaking” or “Hit and Run filmmaking”. I call it “Bootleg filmmaking” which is probably what I film. Don’t get me wrong I love my big ass budget movies, but there is something to be said about making a movie that nobody can tell you that you “can” or “can not” put on film. Anyway this movie is a fun, perverted, gross,vulgar, weird, and honest and I love it. Also there are boobs and penis in it. If you love director John Waters then you will love this movie as well. He makes films the way he wants to make them, and I have always tried to film shit the same way.

A. John Waters please make more movies. If the studio will not give you money, then shoot it bootleg.

B. I love how Divine was cast as a teenager in this.

C. I want different types of switch blades for xmas.

D. I feel like I want a pair of cha-cha heels now but I don’t know what they look like.

E. I love girls in gangs with switch blades. They make sense to me.

F. See what happens when Dawn Davenport eats a meatball sandwich in class.

G. I love to curse and to hear cursing in films. PG Don’t make no sense to me.

H. See what happens when Dawn Davenport get a career.

I. The girls all had huge hair in this movie, that makes sense to me cuz you can hide things in it. 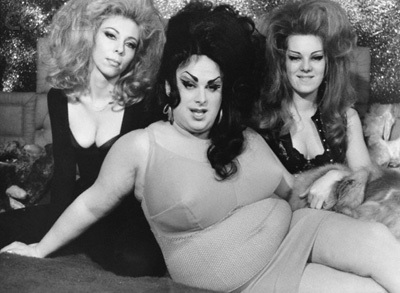 K. There is commentary on the DVD with John Waters talking about this movie, and I love his excitement about his films.

L. I hope they don’t remake this, or if they do, it better have Raven Symone in it as Dave Davenport

M. If you don’t know who John Waters is then you know nothing about film or filmmaking. Go back and buy or rent his shit. Turns out there are a shit load of movies that pre date the year 2000 dumb ass.

N. While trying to find a picture of a pair of cha-cha heels, I found this music video with Bronski Beat & Eartha Kitt called “cha-cha heels”. What the fuck!