Here is my review for “Knock Knock“. This movie is directed by Eli Roth. It’s best you know that right out the gate. He has done such terrible classics as Cabin Fever, Hostel, Hostel: Part II, Hemlock Grove, and The Green Inferno. Okay so this movie starts off and Keanu’s character is close in age to Eli Roth’s real age. Keanu has a couple of kids and a wife that he loves and they love his back. There are million pictures of them all up in the house on ever goddamn wall to prove it. It’s really forced and they want you to see how much of a happy family they are. Now the wife and kids have to go out of town and Keanu is all alone. Later it rains and there is a KNOCK KNOCK at the door. It turns out to be 2 “hot” young girls at the door that are all wet and are lost and have no car, etc. So Keanu is nice/horny and lets them in to use the phone because there phone is wet or some shit. Then the girls need to dry their clothes and get nude so they put robes on to make him hornier. They are stupid, etc. They flirt with Keanu until he gets a boner and then he fucks both of them even though he loves his wife or whatever. The next day he wakes up and the “Horror” begins. Okay not horror, but trouble or whatever. The Coachella girls will not leave and they are making messes with eggs and markers. Oh nooooooo. Crazy shit happens and in the end Eli throws forced cheap morality at us. That we already know and just don’t care about it really. Yeah, don’t cheat on people bitch. He likes to force this weird backwards ass morality on his audiences. It’s like he is showing us his own creepy ass fantasy (one of the Coachella girls Keanu fucks in the movie is literally his wife in real life) about 2 hot girls knocking at the door in the rain then he fucks them, but what if they didn’t leave and he got caught. Fuck you. Even in the movie Hostel half the movie was like yeah let’s fuckin party and get laid, then oh no people in foreign countries will kill you though after they fuck you. It’s like he is jerking off at home then while he is in mid stroke he says “You know what would be fucked up….” while he is still jerking. You are a perv bitch. Shut the fuck up. Your morals and logic are backward ass. Meanwhile I would have shot both those girls in the head. I have also never seen Keanu Reeves act scared in a movie before and let me tell you it was the worst thing I have ever seen in my life. I could have went the rest of my life without seeing that shit. I love Keanu but him in this movie made me sick. Thanks Eli you ruined Keanu. The 2 girls were okay I guess, if you like going to Coachella or Tomorrow World. Meanwhile Eli Roth is a let down to me. His films are forced and yet never enough. Okay they are violent or whatever, but so what. Give me smart and memorable characters. You have not done that yet. So if you love Knock Knock jokes then this is the movie for you, cuz the joke is on you bitch. Wait for Netflix then go in and say it’s one star and not watch it.

A. Keanu Reeves is terrible in this movie and it made me sad. I love him in most things, even if he comes off cheesy, but this was just gross.

B. Eli Roth’s films bore me.

C. Eli’s wife Lorenza Izzo is in this movie. Maybe this is the story on how they met in real life. 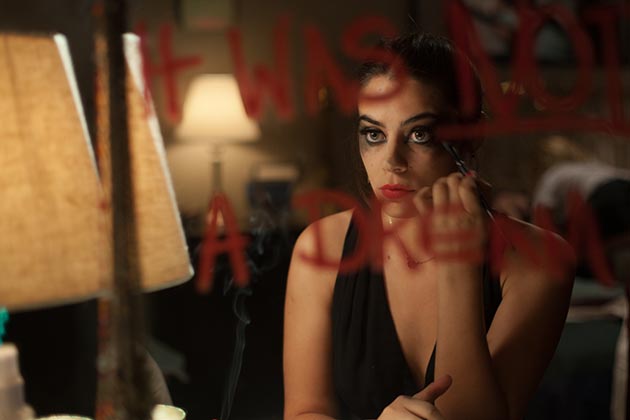 D. You see the girls nude but not Keanu.

F. I would rather had seen the true love story of Keanu and River Phoenix.